I've been reading about upside down tomato plants recently and thought I would give it a go. This might appeal to you if you live in a space where you only have a balcony, or don't want to tear up your lawn to plant a garden. Neither of the cases apply to me, but I wanted to see for myself how this actually works. Some critics of this method say that they don't produce as much, don't get as much leafage, and tend to dry out quickly. So, I've decided to do an experiment, I'm going to compare two identical plants, one planted upside down and one planted in my garden. I chose to use two heirloom Brandywine tomato plants that I started from seed. 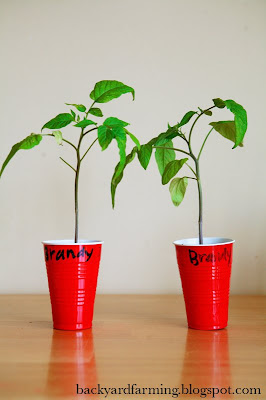 Now, you can buy fancy expensive gadgets to hang your tomatoes, but I have also seen a site where it was done in hanging planters like this (but I never saw the end results). I also found a site that explained how to make them out of a 5 gallon bucket, but it just didn't seem as aesthetically pleasing to me. 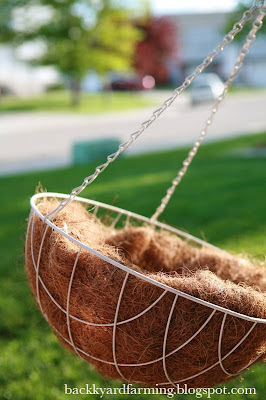 I started by tearing a hole in the bottom, not too big, but big enough to get the root ball through it. 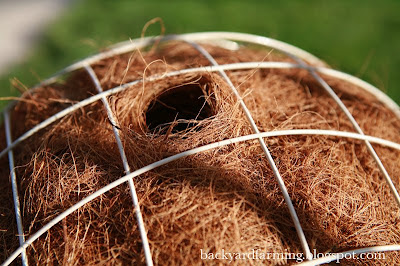 My husband and I debated on which end to push through the hole, my vote was to push the roots through instead of the leaves. I won, because this is my article after all! 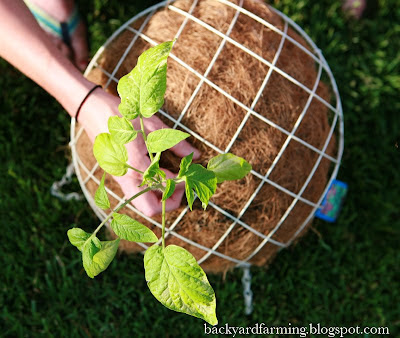 Some of the roots got smashed and broken up, but I do a little of that anyways when I transfer a plant. I still think my way was the better idea!

I repositioned some of the brown 'stuff' around the base of the plant so it wouldn't fall out. 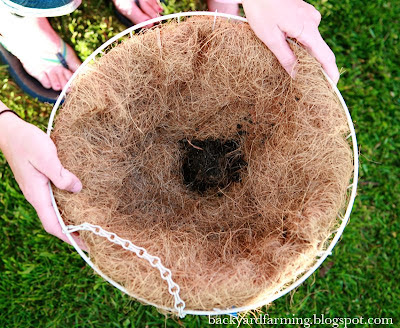 Next, I just filled the top with potting soil and gave it a sprinkle of water. Man was it heavy. 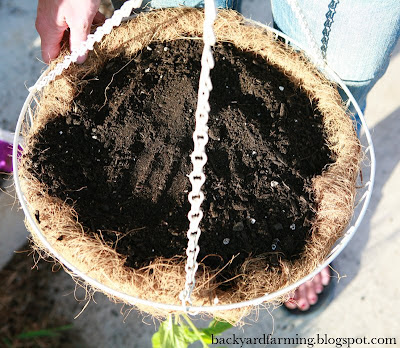 Make sure you have a spot prepared to hang it before you start your project. My arm was about to break off, and it is still sore from holding if for so long (if you put it down, you smash your plant). Luckily we found this little screw in the fence to hold it temporarily until we got up something permanent. 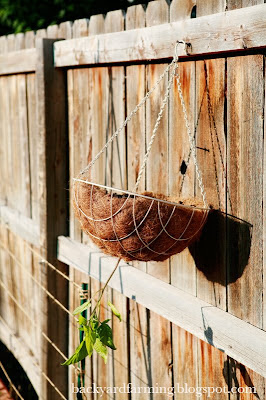 Here is the twin, planted in the garden. 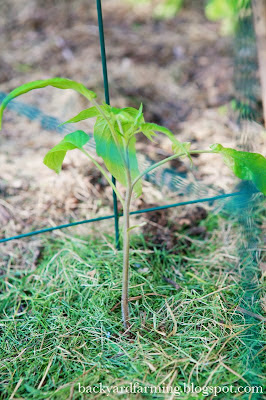 I will keep you updated on how this experiment is going.

Ooo, I'm excited to see how this goes. Keep us updated!

My experience with these fiber basket liners (growing flowers) is that they can dry out fast, so watch for that. Did you soak the liner first? Starting with the liner wet can help so it doesn't pull all the moisture from your soil.

I saw that you used grass clippings as mulch around your tomato plants. Great!

This looks so fun! I'm green with envy -- hee hee -- about how healthy your tomato starts are. Mine are still so small. Go sun!

Jennifer, I didn't even think of soaking the basket before putting the soil in. Good idea.

wouldn't quite call it an experiment. I do this every year with old restaurant pickle buckets. This version is a lot nicer looking though!

The experiment part was to see what produced better and what was easier. I had never used this method, so for me it was an experiment. There are many expensive products you can purchase that use this method, so I also wanted to see if I could come up with a less expensive option.