Yarrow, I think it is one of my new favorites in the flower bed. Last year after hearing that the plant named yarrow did well in this area, I decided to plant some. I stuck it right up front and center in the flower bed, as weather started getting warmer this year, the yarrow started getting bigger and bigger and was blocking more and more of my plants behind it. I couldn't take it anymore and decided that it had to be moved. I dug it up, split it in two and replanted in the back of the bed. Expecting it to go into a bit of shock after the trauma, I made sure to keep it moist for the last few days. I wouldn't have been surprised if it had died all together with the warmer temperatures we have had, as it is not recommended to transplant or divide plants in June. Generally this is reserved for spring or fall depending on the plant. To my amazement, the yarrow didn't even skip a beat, it looks healthier than ever, and looks so much better in the back of the flower bed. Yarrow also attracts Syrphid flies which eat large quantities of garden pests including those nasty aphids. 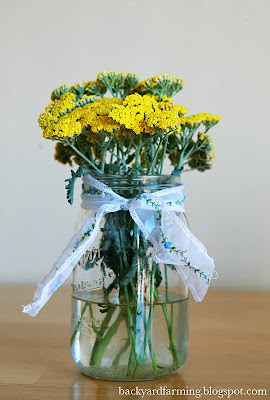 A friend of mine started chemotherapy on Friday and I wanted to do a little something for her besides the same old cut flowers from the grocery store. I cut a few stalks of the yarrow flowers, placed them in a mason jar, and tied a bit of vintage ribbon around it. It turned into an adorable little flower arrangement. I liked it so much, I made one for myself as well.

Yarrow is great for fresh cuttings but also dries extremely well. Just cut the stalks before the color gets sun bleached out and hang it upside down in a dark area.

Not only is Yarrow great for adding color in your flower beds or maybe in an arrangement by your bedside, it also has some medicinal uses as well.

A friend of mine called me the 'witch doctor' the other day. His son had fallen off his bike in front of my house and was bleeding. I quickly ran and grabbed a piece of yarrow for him to place on the cut and it immediately quit bleeding. It has been nicknamed 'nosebleed' for its ability to stop bleeding. Make a tea out of yarrow to fight off those nasty colds. Yarrow can also be used as a diuretic and to lower blood pressure.

You will need:
- 1 pint jar with tight fitting lid
- 1/4 cup dried, coarsely ground yarrow
- a half and half mixture of grain alcohol (Everclear) and spring water.

Place the herbs in the jar, and fill the jar to the shoulder with grain alcohol - spring water mixture. Cover tightly. Store at room temperature, protected from light and heat, for 4-6 weeks. Shake vigorously every few days. After 4-6 weeks strain the mixture through a clean cotton cloth in a colander or strainer. Squeeze to remove as much liquid as possible. Discard the plant material and store the liquid in a dark glass bottle. This preparation will keep at room temperature indefinitely. Apply to itchy areas with a cotton ball.

Get out there and plant some Yarrow!

That stuff seems to grow really commonly here- I had no idea that it did so much so I looked it up on Wikipedia and it has all kinds of cool uses. Good post - and nice arragement.

I've also read that tossing yarrow leaves on your compost pile will speed up the decomposition process.

Did you start yours from seed?

That's right, I forgot to include that it helps speed up your compost. Thanks for writing that. I didn't start it from seed, I just bought the plant.

What a sweet gift! I love yarrow... but I don't have any right now. It can tend to get big and try to take over! Your picture of it in the mason jar is wonderful!

The leaves are also edible and Native Americans chewed the roots when they had toothaches or mouth sores as it provides a numbing effect.