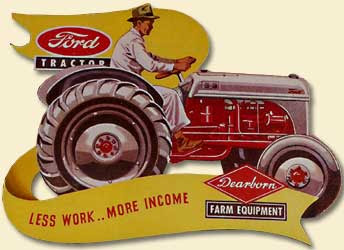 Backyard farmers with larger properties soon realize the necessity of a tractor. You need a mower and harrow for maintaining the pasture, a blade for moving dirt and snow around, a wagon for moving stuff and other implements that make jobs so much easier. But your budget of $3,000 will not get you much more than a big riding lawnmower. Those new Kubotas and John Deeres are expensive.   So you start looking for a used tractor. 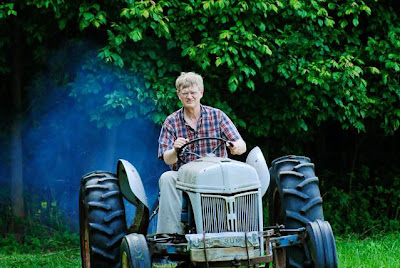 You don’t have to look much farther than the nearest country corner and there sits a gray and red tractor with a “For Sale” sign on it. If you don’t know much about it, you are looking at a true piece of Americana. This is baseball and grandma’s apple pie, all wrapped up in cast iron and sheet metal. This is an 8N Ford, the most mass produced tractor every made. And guess who made it – Henry Ford. This is the Model T of agriculture. From 1947-1952 Ford built over a half million of them and they were gobbled up at a price of $1,000-$1,400 by the WWII veterans who were now back on the farm. They were simple to operate, powerful (27 PTO Horsepower!) and easy to fix. But most important, they were built to last. So much so that half of them are still operating 60 years later! There is no other piece of mechanical equipment in the world with that longevity. 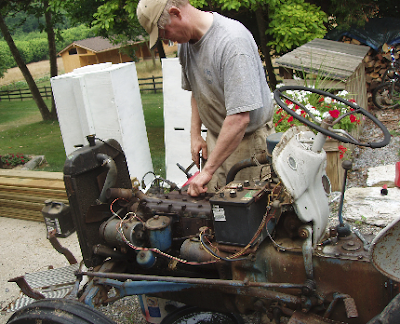 This story even has a famous lawsuit to go with it. In 1938, Henry Ford made a handshake agreement with Harry Ferguson to use his patents in the 9N Ford, the predecessor to the 8N. When the new 8N Fords rolled off the assembly lines with Ferguson’s patents used in them but without his permission, Ferguson sued and got $5,000,000 dollars after court costs, not much compared to the $500,000,000 in sales that Ford got out of the tractors. 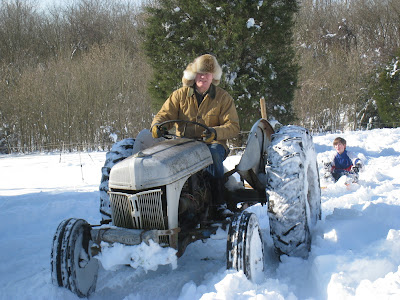 When I grew up on the farm in Idaho, it seemed like every other farm had an 8N sitting around for yard work.  My Uncle Wallace next door had a Ford Jubilee, the successor of the 8N, which I drove a lot. At Ricks College, I rebuilt the engine on an 8N Ford in my farm mechanics class. The first day we moved to Antietam Glen 14 years ago. I saw my neighbor, Bill, drive by on a 8N Ford. For the next few weeks as I talked with Bill, he seemed interested in my farm background and mechanical ability. I finally realized why when he asked if I wanted to buy into this neighborhood owned tractor. I jumped at the chance. Bill is gone now and I am the primary mechanic. I have done substantial work on it to keep it running but it has been worth it. I love mowing the pasture with it. And I love pulling the kids behind it on their sleighs and skis when it snows.  I have got to fix the electrical system before spring. If you’re reading this Mark (my other neighbor), I am not quite ready to give it up yet. 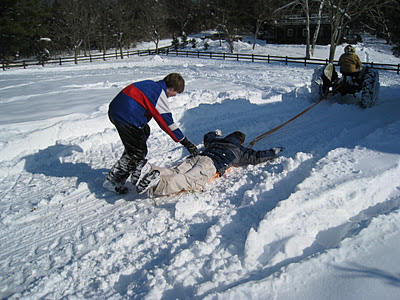 So there you are staring at a priceless antique which can be yours for a mere $2,500. The price even includes an old PTO mower on the three point hitch. And you have $500 left over for anticipated repairs. So go ahead and buy it. Get on line and purchase the shop manual which will give you simple instructions on how to fix it. Locate your nearest New Holland dealer which sells every part for it or buy the parts online. But just remember, you don’t really own it. You are just passing through. That 8N Ford will still be around a long time after you are gone. 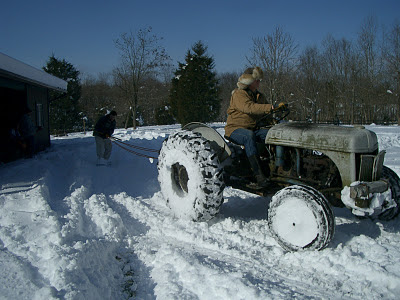 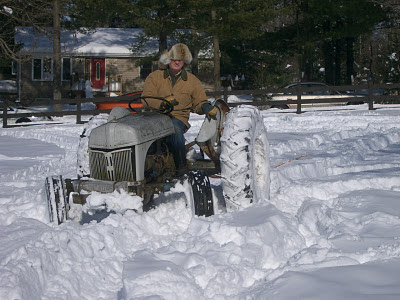 What is the first thing you think of when you hear the word airport? Metal detectors, full body x-rays, vacation, and delays are some of the first things that I think of. I probably would have never thought of the words vertical gardening or aeroponics gardening. The Chicago O'Hare airport hired  the company Future Growing LLC to create an aeroponic food farm withing the airport. The garden is harvested by restaurants within the airport to use for their meals. Check out some of the pictures below taken from the futuregrowing.com website. These beautiful displays are inside an airport! 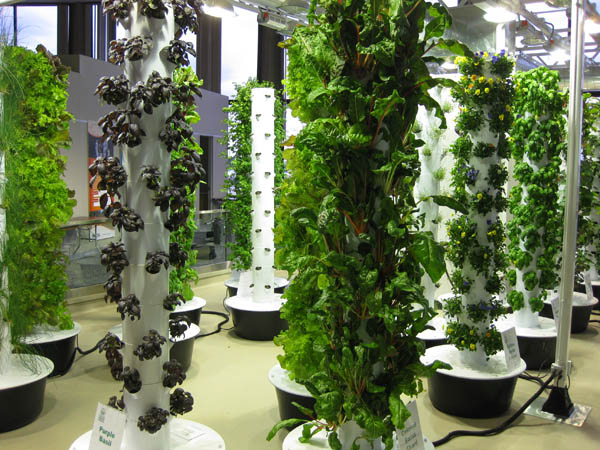 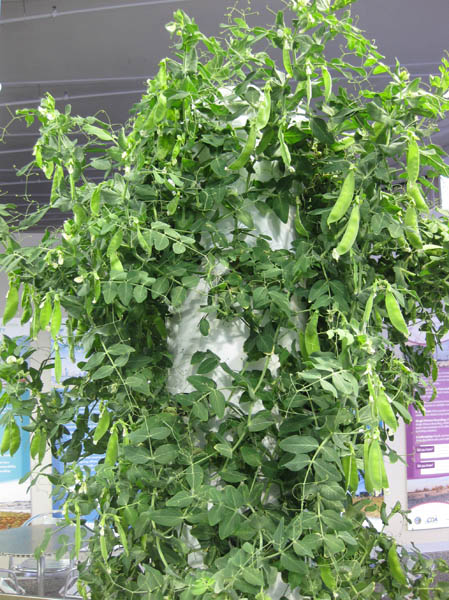 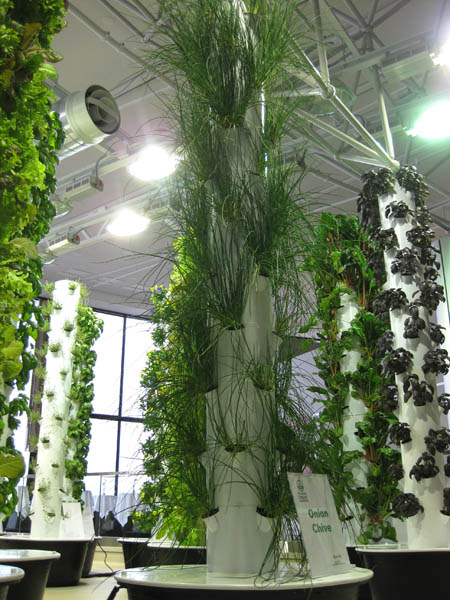 Photo: Future Growing
I love the idea of having gardens growing in public areas. Let's use every inch that we can to grow fresh local food. If an airport can do it, then we should be able to find a place or a way to grow food.
On of our reader's Michael A sent me a link about this. Thanks Michael for the idea.

I can’t beat Michael and Marisa’s recent disaster but all of my disasters here, and here, here, and here, and here combined dwarf their’s, particularly since many of mine involve loss of life.   I had five turkeys that were well on their way to the Thanksgiving table. They were free range in the yard and they seemed to stick close by so we didn’t worry about them very much. But one morning just one of them showed up for feeding so I got a little concerned.  I sent the kids around the neighborhood asking if anyone had seen four renegade white turkeys roaming around (We see wild turkeys all the time). No one had seen them so I got very apprehensive. Our single turkey stuck very close to the house acting lonesome.
One afternoon I went out onto the deck of our house and looked over our pasture. In the middle of the pasture I saw a white blotch. I hadn’t noticed it from ground level because the grass was tall. My heart sank. I walked down into the pasture to a pile of feathers. OH! NO! It was not just one pile of feathers but feathers strewn all over the 4 acre pasture. How could one fox get four turkeys and spread out those feathers so strategically? Our turkeys were all gone.
No one felt the lose more than the remaining turkey. He turned to us for companionship. I was building the veranda on the front of the house at the time and he would stay right by me and brush up against me as I walked around sawing and nailing boards. He kept going up to the glass storm door. I thought he actually wanted to go inside the house but then I realized he was looking at his reflection in the glass. I felt so bad for him. It was the first time I got really attached to a bird so it was tough when Thanksgiving rolled around. The whole episode made us particularly thankful at our Thanksgiving feast. 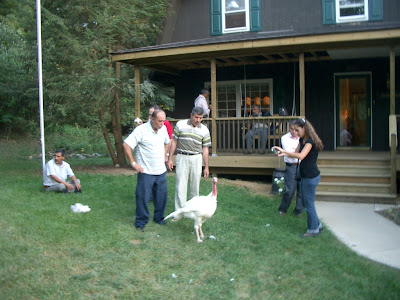 My coworkers from Turkey (yes, the country) admire my turkey in front of the almost competed veranda. 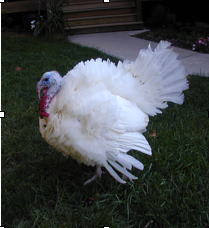 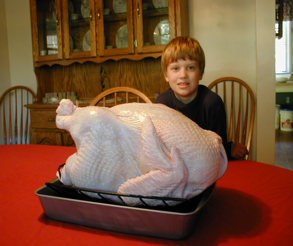 He was a big one! 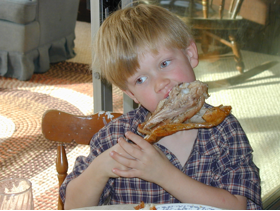 I invite all of our followers in the mid-Atlantic region to attend the Small Flock Poultry Expo that I am helping to organize. The University of Maryland will host this expo on Saturday, February 4 from 8:30 AM to 3:30 PM at the Carroll County Agriculture Center in Westminster, Maryland.
The expo will feature educational seminars on poultry nutrition, disease prevention and control, chicken breeds, egg and meat production basics, housing, pasturing, feeding and watering systems, regulations and ordinances, organic production, litter and mortality composting, breeding and egg incubation, turkey production, brooding chicks, poultry in diversified livestock operations, exotics, egg grading and handling, marketing and economics, urban poultry, and protecting your flock. Vendors will be available with live poultry and poultry related items. A poultry processing demonstration will be conducted. Producers and Extension specialists will be available for technical questions about production practices. 4-H will conduct activities and competitions. Door prizes will be awarded. Lunch and snacks will be available for purchase.
For additional information and a registration form go to http://carroll.umd.edu/ag/poultry.cfm
I would be excited to meet our Backyard Farming followers there.
Uncle Dale

Saturday night while we were leaving a wedding reception, we received a call from our neighbors asking if we knew our chicken coop was on fire.  At first first, I thought it was a joke, but realized that's not something you joke about.  I got off the phone and my other neighbor called to let me know the coop was on fire. Michael and I rushed the kids to the car, and I was about to rip my hair out as Michael was driving the speed limit. In my opinion, speeding was warranted. The 10 minute drive felt like an eternity. 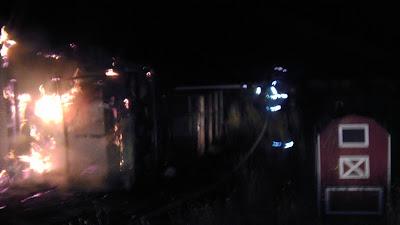 Both neighbors worked together to find our hose and keep it contained. I had a few neighbors calling, giving me the minute by minute play by play, and taking pictures (above). At this point, I was told that 3 of my 7 chickens had escaped into the run area. I immediately broke into tears. I got a call back that the coop was completely gone, nothing could be salvaged. We arrive home, and as I got to the backyard, there were a few of my friends there, I couldn't help but bawl my eyes out. These sweet women wrapped their arms around me, offering comfort and words of encouragement. 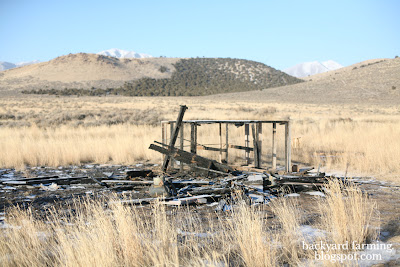 We rushed over to the run area where the chickens were huddled, and we were able to count all 7 chickens. They looked pretty battered and beaten, but they were all there! I can just picture Barry White (our rooster), with his deep sexy voice, telling the girls to stay calm and move into the run.
The firemen were able to secure the run for the night so the chickens couldn't get out. In the morning we moved our Red Barn Coop into a dog run that was left from the previous owner of our home.  It is such a blessing that we have our Red Barn Coop as well as the dog run. There were so many times that I almost got rid of the dog run. 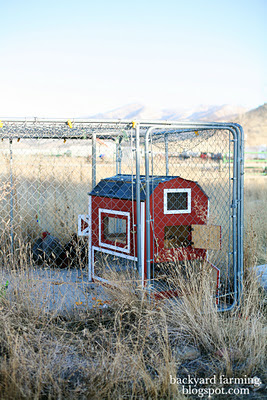 One of our sweet neighbors tried to salvage a star from our old coop. 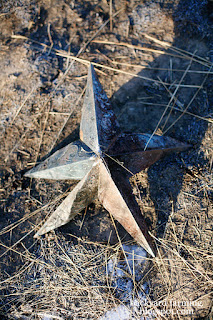 We are so lucky it wasn't worse, the field and our garden has started on fire. We were told that the wind was blowing quite hard toward our house. 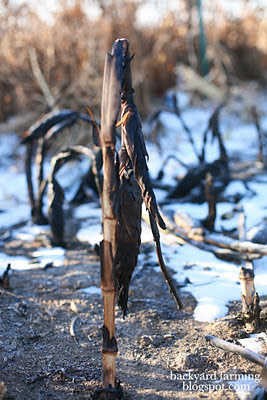 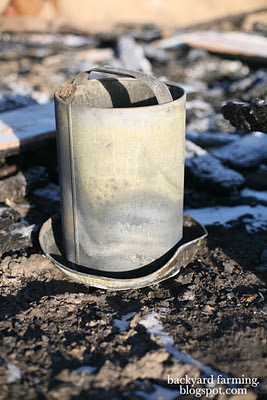 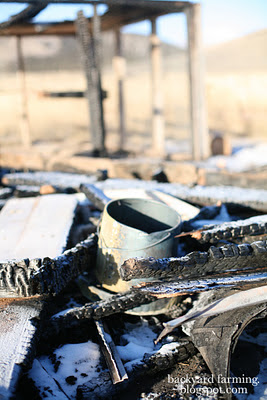 We suspect that our heat lamp had something to do with the fire. 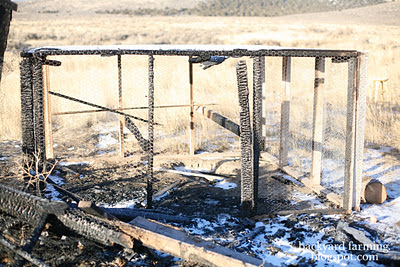 The money we had allocated to fencing for a goat, may have to be used to build a new coop. It is really disappointing, but I'm just grateful it wasn't worse. We are all safe, our house is okay, and our girls survived!

Thank you so much for your comments, prayers, and words of encouragement!  We really appreciate each of you!
~marisa 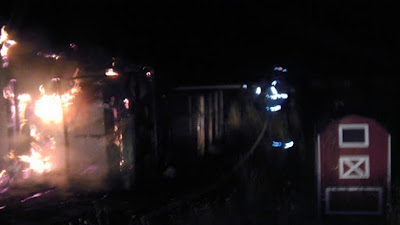