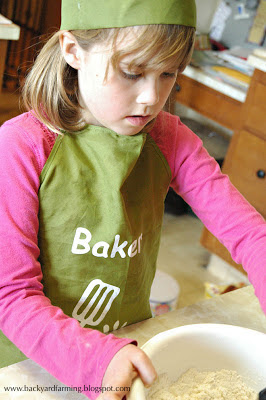 Maybe it's because my mother is such an excellent cook that we tease her relentlessly about her dubious specialty, fresh pumpkin pie. "Is this roadkill again?" someone is bound to ask when dessert is served this Thanksgiving.

Once --  mind you, ONCE -- my mother salvaged a pumpkin thrown into the street, cooked it, mashed it and baked it into a pie.

This was when I was a teenager, that time in life when I knew very little about the behind-the-scenes preparation of the food I ate, nor cared. Garden, can, ho-hum, it was all the same to me. My mom could have kept the pumpkin's origin her little secret. Hmm. I wonder ... why did she tell us? Was she proud of her resourcefulness? How did she so badly miscalculate the comical effect on our family? We've never let her hear the end of it.

Homemade pies have come and gone over the years. When my husband joined the family the story took on new life. "Ah, roadkill pumpkin pie," my dad coined for the newcomer's benefit, and we laughed, a bit in disgust, because we wished we had thought of it first. That session my mom produced new details in justification. It was an errand to drop off my brother somewhere, you see, and when she took the same route home mere minutes later, she spied the newly shattered pumpkin. It hadn't been there before. Thus she established that the pumpkin was as good and fresh as if she had carved it herself, right?

When I learned my mother shared roadkill standards with National Public Radio contributor Bailey White, I about burst a gasket. Her mother is also an excellent cook, but White refuses to eat unless her mom can provide the model and license plate number of the striking vehicle. (See White's fabulous book, Mama Makes Up Her Mind.) Delicious!

This Thanksgiving I wish all of you chances to create new stories, and to be with those whose love is strong enough to laugh alongside you at the old ones.

Do you have a crazy Thanksgiving food story? Do tell!

*To cook pumpkin or squash, cut in pieces, remove strings and seeds and prepare one of three ways: microwave, covered (20 minutes, to start); in 350-degree oven (about an hour); or in a slow cooker (about four hours, but the benefit is you can stack pieces and leave unattended). When fork easily pierces pieces all the way through they are done. Puree with potato masher, mixer or food mill.
at 3:58 PM 2 comments:

I am keenly grateful for men and women who served in the military to protect my freedom. On this day of honoring U.S. veterans I also want to recognize the fascinating history of how civilian backyard farmers supported the troops: through Victory Gardens.

Victory Gardens had their heyday during WWII, but actually began during WWI. Herbert Hoover was head of the U.S. Food Administration under President Woodrow Wilson and formed the program that encouraged people to consume less and produce more of their own food in their yards, playgrounds or city spaces. (Source: Virginia Historical Society.) The increase of personal vegetable and fruit production reduced the need for wartime rationing, and also freed up resources to support military efforts. Consider the effect on transportation, for instance. As more people raised their own food locally, the trucks and trains previously used to transport food were used to support the war.

At the end of World War I many people continued to garden of course, but it wasn't until 1942 that the U.S. government once again promoted Victory Gardens. At the same time the country started the Food Rationing Program.

Gardens began, once again, to change in the eyes of Americans, just as they had in the first world war.  They were no longer just for the poor, or for those who could not feed themselves, but for everyone.  Gardening became popular not only for food security, but for  it mental and physical health benefits and its benefits to the community.  Gardens gave a feel of productivity that citizens on the home-front needed.  A garden plot feels much more useful, productive, and important than a vacant lot or lawn.  With loved one off at war, it greatly improved morale to have an outlet for the patriotism, fear, and anxiety that many Americans felt about the war.  In 1942, about 5.5 million gardeners participated in the war garden effort, making seed package sales rise 300%.  The USDA estimated over 20 million garden plots were planted with an estimated 9-10 million pounds of fruit and vegetables grown a year, 44 percent of the fresh vegetables in the United States. (Bassett 1981)


Victory Gardens flourished in other countries, too, as citizens of England, Canada, Australia strove to raise their own food. The good people of Germany also worked together to raise gardens and address starvation in their war-torn land.

I return to my appreciation for veterans who fought -- and keep fighting -- to make my life better. As it happens, my favorite veteran and my favorite gardener are one and the same: my dad. 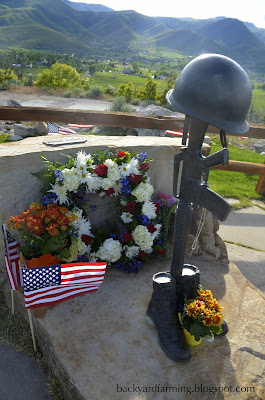 The Veterans Memorial in his town overlooks the beautiful valley where he raises a vegetable garden and keeps a lush lawn for family baseball games. (Yes, that's him mowing DURING a game, because that's my dad!) This land is my land thanks to him and so many other brave souls. 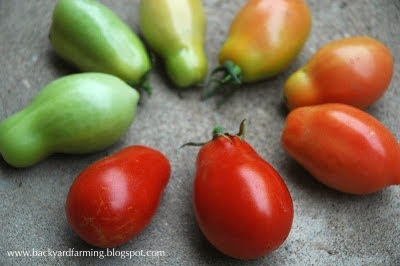 Last week I rushed to the garden to pick as many tomatoes as I could in anticipation of frost. The weather forecast frost forced my hand and I had to harvest RIGHT THEN, but once picked the still unripe tomatoes are rather undemanding about when I need to do anything with them. Today I separated the tomatoes by color or, in other words, by the degree of ripeness. I put a sheet of newspaper in nursery flats and use those as trays for sorting and storing the tomatoes spread out from each other. This is important -- tomatoes that touch each other are more likely to rot. 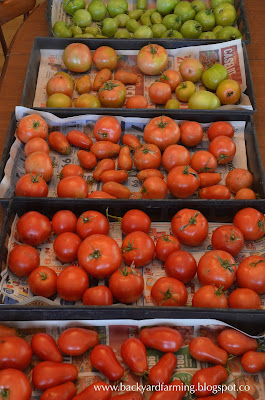 I will place these flats in a cool, dark area in my home. The color/ripeness classification makes it easy to identify which tomatoes need to be used first. (Pasta sauce, coming right up!) The sorting practice further makes me examine each tomato; those that have any cracks or soft spots aren't worth storing until they ripen. They'll spoil first.

You can either wait for tomatoes to slowly, slowly ripen in the cooler storage area, or you can bring a them into the warmth of your kitchen a few days before you expect to use them to hasten the ripening. The tomatoes probably won't reach the same brilliant red of summer, but they will pack a tasty punch.

Another tactic for long-term storage is to wrap green tomatoes singly in paper. A standard sheet, 8.5 by 11 inches, is the ideal size for one tomato. I had a wonderful next-door neighbor who swore by this method, and it was my privilege to help her with this and other gardening tasks when she was in her 90s. (I miss her!)  I can vouch she had tomatoes into January. When doing this check a few tomatoes every week to assess level of ripeness.

This year I'm putting that method to the test, by wrapping half of my green tomatoes in paper, and leaving the others spread out on the tray. I will store them in the same place and see what happens. I'll share the results. I'm not sure what benefit the paper offers. Anyone know? I had a theory that the paper makes a barrier from ethylene gas from nearby ripening fruit. I looked for substantiation online and found conflicting info in two articles on the same site. One said that putting a tomato in a paper bag will concentrate the ethylene gas and make the tomato ripen faster. The other, (mind you, at the same site), said wrapping tomatoes in paper reduces the build-up of ethylene and slows ripening. Okey-dokey. (An aside: My 11-year-old has a science fair project due this week -- don't know what it will be yet -- which perhaps fuels my scientific yearnings!) Stay tuned!

I mentioned that I first put a piece of newspaper in the flats, which is because the plastic bottom is a wide grid instead of a solid piece, and I don't want tomatoes to fall out. The coincidence of this ad made me smile and reminded me why I bother saving the tomatoes in the first place: 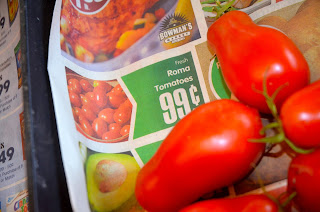 They'll be much more expensive in winter! How long have you successfully stored fresh tomatoes? 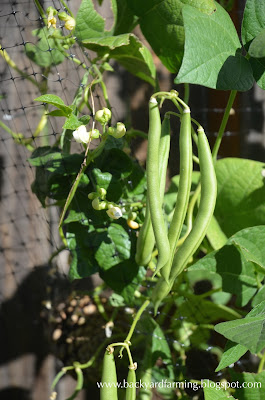 No, we're not talking political campaigns here (although, hey, it's election day!). Instead, this is a look at pole beans vs. bush beans in the home garden.

The classifications of green beans deal with growing habits. Pole beans create long vines that often intertwine and can be trained upward on a trellis or pole (a great space-saving measure); bush beans grow into compact plants about 18 inches tall.

Slenderette is my all-time favorite bean variety. The plants are prolific. I like to harvest when beans are the thickness of a pencil. One year I counted as I harvested, and consistently got about 40 beans this size per plant at the peak of the season -- with more growing for me to harvest in a few days.

Sadly, Slenderette beans did not do so fantastic in my garden this year. The seeds did not sprout well, and those few that did quickly succumbed to rot or pests (my quail challenge), resulting in my replanting three times. It's possible the seed was poor, but I bought it this spring from a reputable source. This was a wet cold spring, and I've had to plant seeds again other years to get viable plants, yet it was interesting to me that the pole beans weren't affected the same way. They sprouted just fine.

Then the pole bean leaves and vines went absolutely bonkers, quickly filling the teepee I built with lush green, and coloring out of the lines to invade nearby tomato cages. But where were the blossoms and beans?

Meanwhile my few Slenderette bush plants were Davids to the Goliath at the teepee, but even though they sprouted more than a week later, they delivered a harvest well before the other made blossoms.

Eventually, the pole beans set blossoms, but the vines were increasingly territorial. This photo shows the bean teepee toward the middle, with scout vines in the left foreground -- about six feet and two tomato cages away from where the seeds sprouted. Crazy! The campaign to take over my garden certainly worked 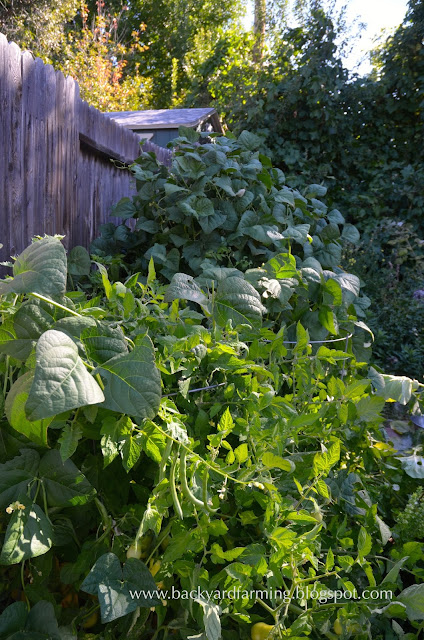 Both varieties produced delicious beans when harvested young. However, the pole beans foliage hid forming beans so well that I often did not see them until they had outgrown their tastiness. That was a disappointment. Also, while the pole bean plants seemed to do better than the bush plants in extreme heat, the actual beans dried out on the pole plants first, despite the lushness.

Here's how I rank these two varieties on gardening issues of the day:

I probably will plant pole beans again because I think they're fun, but next year they are for sure going against a fence where they can't block anything else.

What seed varieties get your vote?
at 2:12 PM 2 comments: