Putting the garden to bed...

Here's an image I took yesterday morning. It reminded me that not everyone is sitting on the sofa watching Christmas movies - some are still busy at work. So since today is the first official day of winter, I thought I'd make a quick mention on getting your vegetable garden ready for the winter. You may have already done some things and if so we'd like to hear about them, if not, it's not too late to get started. If there is snow on the ground - wait until the next warmer day when it melts and get to work!

While not as many of us are ambitious enough to grow winter crops that doesn't mean there is nothing worthwhile to do in our gardens. Winter is a great time to introduce some compost so that throughout the coming months it can work it's way into the soil and introduce some much needed nutrients. If you fertilize it's also good to distribute that into the soil so it can really penetrate and be ready for the spring planting. So, if you've gathered in your last harvest and are ready to put the garden to sleep check out the following links for some good reading!

Here's some practical tips from the garden stew online community.

Here's a link to a fellow gardener and her methods.

And below is a video with some really helpful information:


For the rest of the clips in this series - click here. 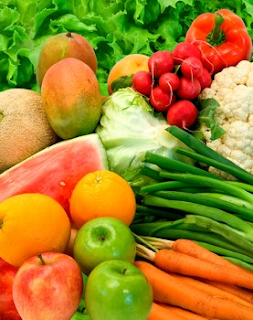 My real food challenge is complete and what are the findings? You may be surprised by how many there were!

First off, I lost weight. Granted it was the week after Thanksgiving - but the few pounds I gained the week before quickly went away. That is a lot considering I'm pregnant. Second, I wasn't hungry! This was surprising because I love food and usually I feel starving at different times throughout the day but not this past week. I felt satisfied for several hours after each meal. Third, I have an irritable bowel that tends to slow down VERY easily - even though I get more than the recommended dosage of fiber every day! But this week - all of the problems stopped! I didn't expect that but I had no bowel issues what-so-ever! Isn't that interesting? I think a lot of that has to do with the "mostly vegetables" part of the challenge. Fourth, my kids didn't complain near as much as I thought they would. They treated it more like a game, asking me if this was a real food or a food product. They were even eating my strange made up vegetable concoctions! Fifth, I just felt better - maybe even happier. Last but definitely not least, the food tasted way better. I was expecting this but I think I was still a little surprised by the quality of it all. Even down to hot chocolate. We made our hot chocolate from scratch on a couple cold nights last week and then when it was all over my husband made some from a nicer mix we had and it didn't even come close to comparing. And in the end, taste is what really matters to me.

Now was it all easy schmeesy? Not completely. I wish I had prepared better. I had to make up most of my entrees and I wish I has some recipes with foods that are in season and all natural. That would have been pretty easy but I just didn't do it. Also, I should have planned by making some substitutions for things we eat instead of just going without. Like mayo and ketchup - those are simple things to do but you're not going to do them the night your making hamburgers.

So, in the end? I don't know. It's funny - it's not like you want to just start eating cheetos every day. So you wonder what to do next. I think we'll be keeping most of the new habits we picked up just with a little more leniancy - like...hmm, I don't know - I can't think of any one thing I want to give up but I imagine those things will come up - we'll just take it one meal at a time! All in all, I highly recommend that you do a little week long experiment yourself. Your eyes will be opened and your bodies will be happy. So, give it a try and let us know how it goes for you and yours! 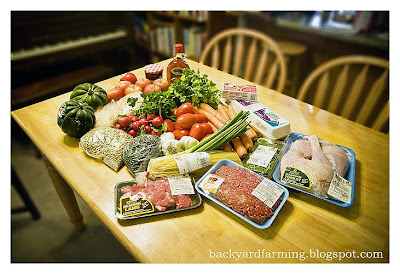 Day 2 was a great day. I went to a store about a little less than a half hour away that sells organic and natural foods and was surprised by how little real food even they carry. But in the end we came home with a pretty good bounty. Click on the image to see more details if you'd like. So we ate our grass fed lamb with potatoes and curried brown rice for dinner. It wasn't the greatest meal since I kind of had to make it up with the things I could find at the store and at home but it was good enough.

Today(Day 3) has reminded me of why most people don't eat real food. It was one of those days that moms have every once in a while where everything is crazy and you wish you could just order pizza for dinner. We are supposed to have bison burgers for dinner but since I couldn't find buns without additives or white flour I knew I needed to bake my own. Needless to say that dinner is fast approaching and there are still no buns. And still no oven fries. Ahh! What does a mom do about real food dinners when she's in a pinch? Pancakes, perhaps? I'm still not sure but I'm not giving up yet. I'll let you know how it goes!

My real food challenge based on Michael Pollan's book, "In Defense of Food" was originally going to be last week but I soon realized it would conflict with Thanksgiving. Because we were eating with a lot of my husband's extended family, I didn't want to be the jerk asking everyone what they used to make their dishes so I decided to hold off until today.

I started the morning with my typical toast. Since the bread I buy has only 6 ingredients - all of which are real foods instead of food products - I got to enjoy my usual fair with some basic salted butter. For lunch I had some homemade macaroni and cheese with the addition of tomatoes to add some vegetables. I know, technically tomatoes are a fruit but oh well. That afternoon I knew I needed to head to the store to get some food as my cabinets were bare after the long week away. Because I live in a small town my options for shopping are limited and since my time was limited today I had to head to the big town Walmart. I spent most of my time in the produce section buying what was in season and what looked good. I didn't have any sort of list with me so I just grabbed a hodgepodge of things - spaghetti squash, tomatoes, and broccoli. I added some Parmesan cheese and was on my way out when I noticed that Walmart actually sells some bulk goods like beans and dried peppers. I had ever seen these items as they were tucked in between the donuts and the store made cakes! I decided that it doesn't get less "produced" than that and got some pinto beans and peppers. W 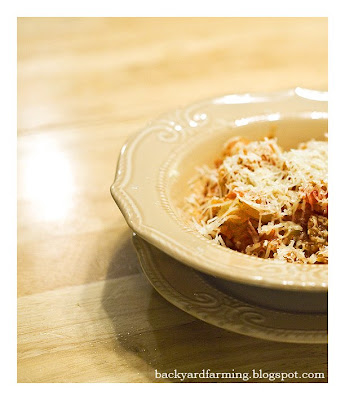 hen I got to the checkout I soon discovered that I am not the only one that hasn't seen these items since after literally ten plus minutes of the checker trying to figure out what to make of them I gave up and told him to keep the beans and dried peppers!

For dinner I threw most of those things together except the broccoli, added some cooked cubed potatoes, olive oil, garlic, spices and red pepper flakes into some sort of squash goulash. It felt like some sort of food peasants in Italy might eat but I was happy since it definitely met the criteria of mostly vegetables. I knew I'd like it but was very pleased to see my kids enjoy it as well! So day one seems to have worked. My boys are already missing their honey-nut cereal and my husband cheated by eating some doritos for lunch but all in all it wasn't too hard to choose foods that make such a huge impact on my health and the health of the planet. We'll see how the next few days go!