Even the President is getting his hands dirty!

Here's an article taken from CNN.com about the Obama's ew kitchen garden. Gotta love that the President and his family are following such a wonderful trend! Click on the link to see a short video with the First Lady talking about her garden.

WASHINGTON (CNN) -- Want to know where the presidential produce comes from? 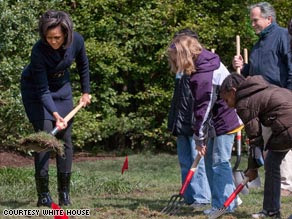 Take a walk past the White House. The answer may be planted right in front of you.

This time, however, the enemy is obesity. The first family is hoping to send a clear message to a fast food-driven nation that often seems to be losing the battle of the bulge.

"We're just hoping that a lot of families look at us and say this is something that they can do and talk to their own kids about and think a little bit critically about the food choices that they make," said Marian Robinson, the president's mother-in-law.

The first lady told a group of Washington schoolchildren on hand for the occasion that first daughters Sasha and Malia Obama were usually more willing to try fresh fruits and vegetables because fresh produce generally tastes better.

"What I found with my kids [is that] if they were involved in planting it and picking it, they were much more curious about giving it a try," she added.

"I've been able to have my kids eat so many different things that they would have never touched if we had bought it at a store because they either met the farmers that grew it, or they saw how it was grown," she said.

"They were curious about it and ... usually they liked it."

The idea of a presidential kitchen garden, used year-round with different seasonal crops, has been strongly promoted by advocates for organic and locally grown food. They argue that the White House garden may help set a positive example for families short on time and money, who are often tempted by cheaper, highly processed food.

The presidential garden will be used, among other things, for growing such staples as butterhead and red leaf lettuce, spinach, broccoli, onions, carrots and peas.

It will also include a range of herbs, including sage, oregano and rosemary.

The garden is one of several additions to the White House South Lawn. A swing set for the first daughters was recently installed near the Oval Office.
at 12:00 AM

I think this is great! I hope this garden will be promoted to every White House visitor. I can think of no more prominent lawn to convert into a vegetable garden than this one.