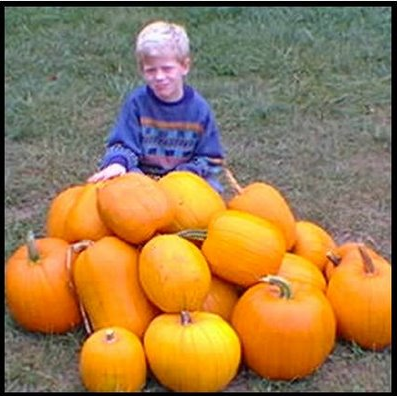 NOTE: This is another in my series of articles on backyard farming disasters. When a friend read it, he said that some people will take issue with my actions. After considering this, I decide to go ahead and share it with you anyway. In the context that we use fauna for our purposes, I consider myself a pragmatic animal welfare advocate. For example, I am critical of industrial layers houses which I consider cruel – see my article Liberate the Layers – but I accept industrial broiler houses which I feel are reasonably humane. I have been in both. I think we need discussion to moderate the extreme viewpoints on both sides of the animal welfare debate. I much prefer the phrase “animal welfare” to “animal rights.” Judge for yourself my actions below.
We decided to get into pumpkin production. The first year was great. We grew about a quarter acre. The pumpkins were beautiful and they sold quickly out of the pickup bed following soccer practices. They second year promised to be just as successful. But in mid October we didn’t check the patch for about a week. When we finally went down to start harvesting for the Halloween market, we found half eaten pumpkins and deep tooth marks and gashes on all the others that were still intact. Hardly one was spared. We soon discovered the culprits, a family of groundhogs. There was hole right in the middle of the patch and several around the periphery. As we were assessing the damage, a ground hog came out of the hole and our Labrador retriever “Cinder” drew first blood. She is normally very docile & lovable but when she saw that ground hog she went after it with a vengeance like she sensed our emotions. It was a real fight for a couple of minutes before Cinder prevailed with us cheering her on. It was Herbert Spencer’s “survival of the fittest” in action. We then hooked up our irrigation system - a pump and a 2 inch hose delivering 50 gallons of water per minute out of the creek. We shoved the hose down the ground hog holes and flushed the rest of the family out in seconds and dispatched them quickly. It was very aggravating to see a whole year’s crop of pumpkins worth $500 for the kid’s hard work destroyed. Ground hogs present another more serious hazard. Their deep holes in horse pastures sometimes go unnoticed. When a horse runs across the pasture and plants a hoof in the hole, the leg snaps requiring that the horse be euthanized. If a horse has a rider, they can be thrown and seriously hurt. It is usually not practicable to trap and relocate groundhogs like it is a black snake out of a chicken coop. In my area, groundhogs thrive in natural habitats – and there are plenty of both to perpetuate the species.

I don't think that anyone could have faulted your actions in this case...Imagine if your family's survival had relied on having a good crop? Your family would have perished and the groundhogs would have thrived.

I believe in animal control. Not to extinction, mind you, but groundhogs are rodents and they multiply quickly. They would have moved on to destroy your other crops this Spring.

Self-preservation is the first law of nature...Glad to see that you came out on top!

How many more apocalypse stories do we get to hear? I am looking forward to hearing them.

Eesh - that is a sad story, but real life isn't all sunshine and roses, is it? We all eliminate pests in our gardens - yours just happened to be furry and cute, which makes it harder. I'm a huge animal lover, but I don't think you had much of an option.

Funny how people will criticise you for killing some animals (groundhogs, rabbits, etc) but then happily set traps for others (rats, mice, etc).