Article from the Deseret News 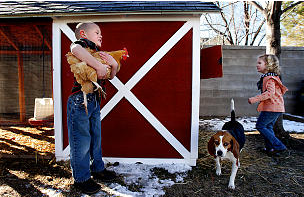 SOUTH JORDAN — Six-year-old William Richmond doesn't care which came first — the chicken or the egg — as long as the shelled one is cooked just right so he can dip his toast in its yolk after eating its "white stuff."

William and his South Jordan family are part of a growing population of Utahns buying small flocks of backyard fowl this year as a supplementary food staple. Most of them cite the troubled economy as their No. 1 motivation.

And more chickens could be flocking to the suburbs if Salt Lake County loosens its zoning regulations. Currently, the county only allows chickens on properties that are at least a half-acre and zoned agricultural. The proposed change would permit up to 15 fowls in more common-sized yards, according to Bev Uipi, community relations specialist in Mayor Peter Corroon's office. The deadline for public and community councils to comment is April 1.

Before the National Bureau of Economic Research formally announced the beginning of a recession, Bud Wood, co-owner of the giant Iowa chicken farm McMurray Hatchery was working his gentle 99.5-degree incubators overtime to keep up with a sudden booming demand in spring 2008.

Besides disease concerns, new owners may want to check with county and city regulations about where they're legal, which varies enormously.

"We only get involved if there's a complaint regarding sanitation issues," said Pamela Davenport, spokeswoman for the Salt Lake Valley Health Department.

But paying off neighbors with fresh eggs is a great way to keep them mum, according to fi 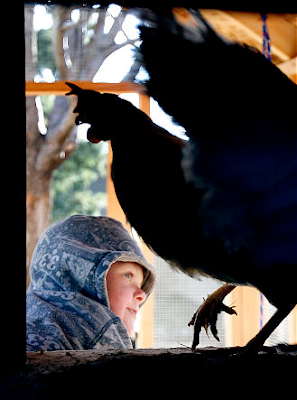 rst-time chicken owner Karey Richmond, 31, who laughingly admitted to walking a few rounds "to say thank you for not complaining."

If folks like Richmond go without complaints, Davenport said the South Jordan woman will just be regulated by the city's zoning. Davenport also said the department has noticed a lot more calls lately from curious people wanting a backyard flock.

Mayor Corroon thinks it's a positive step in a trend toward more sustainable living, said spokesman Jim Braden, but it's not without its downside. Families and communities have to consider a number of things.

Avoiding illness is paramount, according to Larry Lewis, a spokesman for the Utah Department of Agriculture.

Lewis recommends that people don't mingle them with other birds. Birds often get exposed to other bird's illnesses in swap-meet like gatherings, Lewis said.

That's something Carl and Heidi Wasden of South Jordan know a little bit about. The couple raised chickens for a 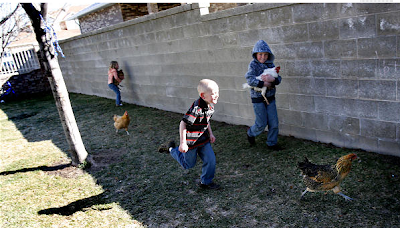 decade 15 years ago and just recently returned to the chore-laden lifestyle this month by purchasing a brood of eight chicks — and plowing for a large garden.

"We'd be crazy not to with the economy the way it is," Heidi Wasden said, "especially since we have the room for it here."

The Utah Department of Agriculture has information on raising chickens and safe handling of poultry on its Web site, ag.utah.gov.

Very interesting. I just read another blog that said she read where seed sales are also up this year.

I actually think there is something positive going to come out of this economy - in that more people will get back to the way things use to be where they grew/raised some of their own food.

We would like to add some chickens to our urban homestead but will most likely wait until next year.

Sandra, I agree with you. I think as a nation we are over consuming and over spending (personally as well as as a government). More and more of my friends are asking me about gardening this year. This economy is really helping people get back to the land.

I envision millions of little backyard and rooftop ecosystems all over the U.S. and around the world producing a cornucopia of wonderful fruits and vegetables from early spring to late fall! To complete each of these ecosystems is a small flock of hens happily eating the leftovers, laying eggs and producing fertilizer! By ushering in this Eden, we will downsize the industrial complex of vegetable and layer operations and its associated problems! Thank you for posting this article Marisa!

I'm just north in Syracuse UT and we were able to get the city laws changed last year. We've had our "girls" just over a year now so I'm always glad to hear that it's catching on.

I can't take credit for this one. Jennifer sent me the article from the Deseret News and I posted it. I wish I had written it!!!

I just love that more and more people are getting their own girls.

My big problem with gardening was always that I ended up with all this "stuff" I didn't know what to do with quickly enough. I'm getting better at it and I've learned a few great tricks from this blog. I would love to see more articles on planning for what to do to get the most out of the harvest - for the short and long term.