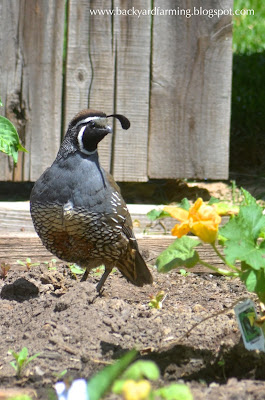 As much as I think quail are charming little birds, I don't like the damage they cause in my garden. They were sneaky ... at first. In early summer I occasionally noticed a depression in the ground about three inches deep and the diameter of a salad plate. No vegetable starts were disturbed, however, so I didn't fret. It could have been caused by a burst of water from the hose, for all I knew. As summer advanced I saw new holes everyday. From what? Finally, shed feathers shed some light. Ultimately I got a sighting: this brazen specimen hung out in the garden while we ate a picnic lunch nearby. He behaved quite well, I thought.

Ah, to lull me into complacency. Up to this point I still thought quail were pleasant additions to my landscape. I was stymied but smiled when I found an egg in a garden hole one morning.* The quail went from charming to harming (tsk, "harmful") in my book the day I found holes right up against my tomato plants, exposing their root balls.

Hardly any of my bean seeds sprouted, and I wondered if the quail were responsible for that, too.

To thwart the birds I used a pile of black plastic netting, draped loosely in layers over my bean patch and around the base of tomato plants. I figured that if I spread the netting out in a single layer over the soil, the birds could still peck through the size of the grid to get the seeds. A mass of netting, on the other hand, offers 3-D protection that doesn't ensnare emerging seedlings. Besides, it was simpler than cutting and staking. 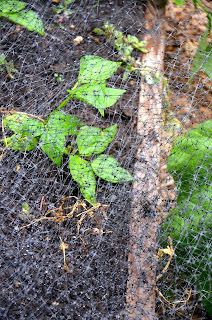 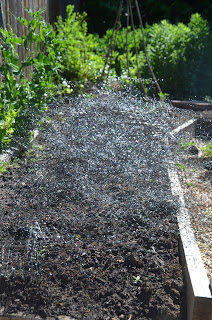 Standard conical tomato cages won't deter digging animals because the openings at soil level are still so wide. It's better to create a barrier on the ground that goes all around the plant.

I know the quail still visit. Mostly I hear them before I see them, with their helicopter-sounding takeoff a far noisier giveaway than if they just stayed put. Silly birds. These garden measures haven't hurt them but established boundaries. I love when a group of them do a frantic single-file march down the lawn or sidewalk, each following the leader's curlicue path. They are cute. As long as they play nice.

* The egg was broken the following day. Great, another critter.
at 6:01 AM

NOT THAT KIND OF FARMER said...

Jennifer, Wildlife has a way of believing that the human has grown this wonderful food just for them. They can be quite greedy too. They think it was all grown just for them. I have raccoons that think that's true for sweet corn. The groundhog thinks that tomato plants are for his dining delight. I found that deer like strawberries for a snack and ate mine right down to the roots. Thirteen out of thirty have recovered but there will be no strawberries this year. Those pesky deer have taken a liking to the female squash and pumpkin blooms. My plants have tons of blooms but are all male.

Now the power company wants a 34 foot easement to replace power poles and lines in the front of my garden. That's half of the most developed part of the garden. It's not a purchase of the land but just an easement to use for their machinery if needed. Ah, the joys of being an urban farmer. :-)

Have a great garden boundry day.