I bought a container of strawberries and as I went to throw the container in the recycle, I stopped myself. I knew that the container could come in handy when it was time to start my seeds.
And I was right.
I had a package of older seeds. I wasn't quite sure what percentage of them were going to work out. It turns out, quite a few were bad. I had to keep sticking more seeds in the soil because so few were germinating.
But, some did pop up. 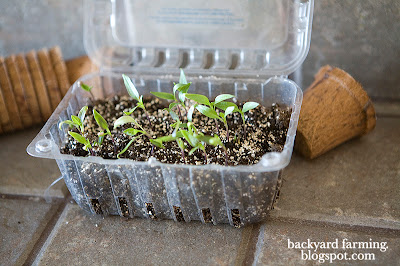 And it was time to separate these guys.
I found a spoon would do the trick of digging them out while preserving the roots. 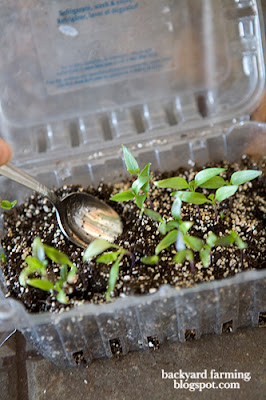 Before placing in the pots, I filled them with more seed starting mix. 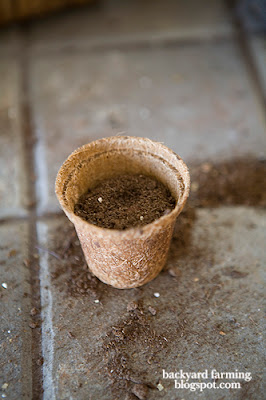 Then, I popped them into the pots, just like so. 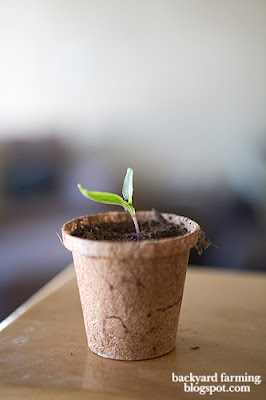 I had saved this container that some spinach we bought came in. I knew it would be perfect to hold my plants. It also makes it nice because I can bottom water.

To water these guys, I just pour in about a cup of water,  the pot and the soil sucks up the water from the bottom, and there is no damage to the plant. It is great! 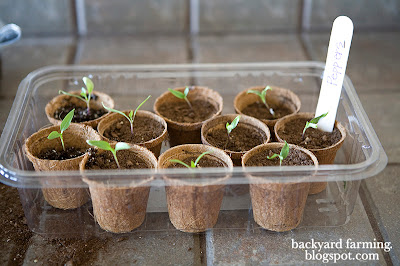 Fabulous! Thanks for the ideas.

Wonderful to see all those sprouts! Have you ever tried making seedling pots out of newspaper? It's easy and a great project for the kids to do, plus it's more economical than using peat pots. Just an idea...
Enjoy your seedlings!

Daisy, I actually have made them before. I don't get the newspaper (so I may need to do some dumpster diving, or just ask the neighbors for some)

These pots were leftover from when I taught a seed starting class.

The seedlings look great... and such a great use for those containers. Wish I hadn't thrown out my strawberry container- but now I'll know to save it time around.

So, do you have instructions on how to make pots out of newspaper? What a great recycle project. - Catie

I've got several kinds of seeds started in recycled containers- strawberry packs and some cookie containers I saved from work. People look at me strangely when I'm taking what they see as garbage home from work. But they work great for seeds.
Judy

What are you growing? I like the idea of saving these plastic boxes. I'll start saving them. We buy a lot from farmers market which don't have the containers but family will save anything for us. =0)

Right now I just have peppers and strawberries growing. Next week I will start all the rest of my seeds indoors.

Sorry, Marisa for butting in. Just wanted to help.

Here's the link to newspaper pots here at Backyard Farming.

The strawberry container idea is so smart! I will have to have my family save theirs so I can have them, they are perfect. Have a good day! :)