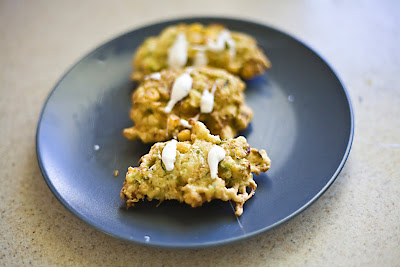 If the end of the world ever comes, the first seed I will plant in my post apocalyptic vegetable garden is going to be a Zucchini. It’s not my favorite vegetable but I have never had problems growing this magical squash. Not only do the Zucchini plants I plant live they thrive and I always end up with too much of it. I ask you, what better plant to try to sustain myself with when the superbug has been unleashed, or the nuclear bombs have been launched, or the asteroid has hit the planet.

I found a great recipe for Zucchini Fritters on this link. http://www.seriouseats.com/recipes/2009/08/what-to-do-with-zucchini-and-corn-fritters-recipe.html

Here is the recipe from the article.

1. Shred the zucchini on the large holes of a box grater or with the shredding disc of a food processor. Place the shredded zucchini in a colander in the sink or over a bowl and sprinkle with the salt. Toss to combine. Let drain while you prepare the rest of the ingredients.

2. Crack the eggs into a large bowl and scramble lightly. Cut the kernels from the corn cobs and add the kernels to the bowl along with the diced onion, sliced scallions, chopped cilantro, flour and pepper.

3. Pick up the shredded 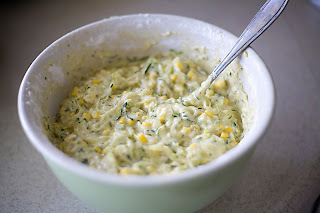 zucchini in small handfuls and squeeze out and discard as much liquid as you can. Add the zucchini to the bowl. Mix well to combine.

4. Pour the oil into a large frying pan to a depth of about 1/4-inch. Heat the oil over medium-high heat until hot but not smoking. Drop large, heaping spoonfuls of the zucchini mixture into the p 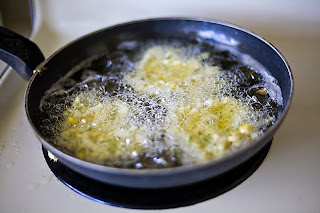 5. Serve with a dollop of sour cream or Greek yogurt. The fritters should be crisp on the outside and slightly custardy on the inside.

I added some oregano and cut out the scallions. The result was amazing. I made two versions. The first was a smaller appetizer fritter that we served with some ranch (I hate ranch but I used it so the kids would eat it). It was wonderful. The outside was crisp and the inside was almost creamy. If I would have made more we would have ate more.

The second version was more of a dinner. I made larger fritters and covered them with some fresh overeasy eggs from our chickens. The yolk from the eggs and the fritters combined very well together. As you can see in the picture I added some hot sauce as well for some kick. 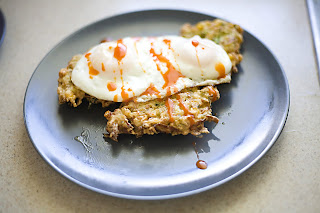 I know it’s not the healthiest recipe because of the oil but it didn’t seem like the fritters absorbed much oil so they weren’t too heavy. Besides, I won’t be worried about frying food when the world has ended. Sorry about the dark view of the future but I just finished reading The Canticle for Leibowitz which is a wonderful post apocolyptical book written in 1959 about what happens to the world after nuclear war. There weren’t any zucchini in the book but there should have been. They would have flourished.

I love your articles. Not many people can turn zucchini and fritters into absorbing reading.