The other day I was talking to one of my coworkers who happens to drink raw milk. He was telling me about an experience he had while buying raw milk. He was walking out of the market where he bought it (yes we can buy it from a market here in Utah) and a lady walked up to him in her hospital scrubs. She said to him, "I normally don't do this, but did you know that that milk could kill you?' My friend quipped "Yes I do, I like to live on the edge. In fact, I am going to give some of this to my kids too." The concerned citizen's mouth dropped open and she turned and fled away from the crazy risk taker. 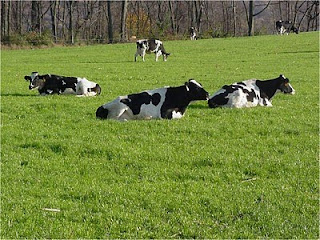 It is a funny story but it really got me thinking. At what point were we all so indoctrinated to think that raw milk comes straight from the bowels of hell to destroy humanity as we know it. Why are people so afraid of raw milk and the dangers it poses? I really wonder where this fear comes from.

Not only am I puzzled by individuals but there is hypocrisy with the government as well. As the FDA is deciding whether or not they are going to approve a new drug, they look at the benefits of a drug and compare them to the drawbacks. If good outweighs bad, then a new drug is approved. Why isn't the same philosophy applied to raw milk. Why don't they look at the good and see if it outweighs the bad before cracking down on local farmers that sell raw milk to consumers that are more aware of what's good for them than the majority of the people that are chomping down on Big Macs.

Why then, when people find out about me drinking raw milk, do there faces go pale and they tell me I am going to die. They look at me and treat me as if I were the walking dead. I understand that there are potential dangers from raw milk but there are dangers everywhere. Why the extreme fear of raw milk? Let me know if you have a theory.
at 7:26 AM

What's interesting is that there have actually been way more problems with food poisoning and pastuerized milk than with raw milk. And usually the problems with raw milk stem from poor sanitation at the dairy (which would cause a problem in pastuerized milk as well) or poor health of the cows. Not to mention we start out our lives drinking raw milk that isn't even under USDA control...

When I read the history of how we all started pasteurizing milk, it explained a lot. Due to some very unhealthy practices (none of which are commonly practiced today), a lot of children DID die. The two men who pushed for pasteurized milk each lost a child because of drinking contaminated raw milk.

That said, my personal opinion is that it is safe to drink if your cows/goats are healthy and you handle the milk properly. We've been drinking it for several years now, and I wouldn't want to go back. But I have had good friends who are nurses plead with me not to drink it. I believe that because it is such a foreign concept in our ultra-sterile 21st century, and we are so far removed from living close to the land, people cannot even conceive of drinking it straight from the cow. I wonder if in 50 years people will only want produce grown hydroponically in a sterile environment because they are afraid of dirt!

I would have felt like saying..."well, did you know that where you work kills hundreds of thousands of people on a yearly basis, while raw milk has had approximately 7 cases (none of which resulted in death) of POSSIBLE sickness in the last 20 years?" That's as ridiculous as the nurse who, one day in line at the bank, overheard me talking about midwives, and promptly proceeded to turn to me with crazy eyes and say..."those women are MURDERERS, and ought to be outlawed by the government!!" What an exhausting mentality.

I grew up on raw milk, often it was so fresh it was warm still. Now that I live in Canada, I can't access it unless I do so illegily. It's all about money in the end, bacteria in milk *can* potentially make you sick immidiately, and so then someone is getting sued. Hot Dogs may not make you sick on the spot, but they certainly will down the road. It's messed up!

We shouldn't be going up to anyone anyway. It's one thing to present information in a public forum about the dangers of this or that. But to get in anyone's face and denounce them for raw milk, twinkies, smoking, etc. is intrusive, pushy, and rude.

That said... It's sad how our society has become so terrified! We live in an era jacked full of fear. So much so that raw milk is looked at like Death Juice! Very sad.

I agree that money is the culprit. If enough people choose raw milk over that of big industry pasteurized milk, then someone is losing money somewhere. Big business has never been accepting of anything that gets in the way of profit.

The bottom line is always about money. To keep people in the loop of pasturized, homgenized, steralized, milk fear has to be promoted in the general public. I grew up until leaving for college drinking raw milk. Didn't seem to hurt me any and I can't ever remember once getting sick from drinking milk, eating the butter made from milk, drinking the butter milk, or eating the cream soaked cereal before going to school. Imagine that?

This is just the topic covered by an outstanding book "The Raw Milk Revolution" Behind America's Emerging Battle Over Food Rights. It is an issue fed by lies, money and FEAR. Almost anything is more likely to kill you then raw milk, but it is easy to give up raw milk, no one wants to give up their deathmobiles (cars and yes I have one) or stop eating junk. It's easy to prey on fear of the unseen (bacteria) even though sheilding ourselves from the good bacteria in raw milk,slathering ourselves in hand sanitizer and radiating our "fresh" foods is really what is going to be the mass death of many. By the way, we have goats and love their milk!

I often get really strange looks when I mention I have a dairy goat and drink the milk raw. I'm not sure if they're thinking the raw milk is weird, or actually drinking the milk from a goat. I think much of it has to do with the fact that people are SO far removed from their food, that they think it's unusual to directly milk the animal and then drink it! Like they think milk only comes in jugs at the grocery store. Hah!

I think it is a shame that raw milk is illegal when other substances that can be way more unhealthy (raw fish (I love sushi, btw), alcohol, cigarettes, junk food) are perfectly legal. How about letting consumers decide what they want to drink? And if the government really feels the need to be involved, how about setting some sort of standard so at least people have the option of legally selling raw milk if they agree to get inspected? I'd be up for that.

I grew up on raw milk, but until a year or so ago wasn't able to get it once we left the farm. Now I buy from a neighbor in the next town. It's legal in our state to sell limited quantities with some conditions (like people have to document how much they bought and when). One thing I like is that, although the price I pay is about the same as the price for pasteurized in the supermarket, the farmer is getting all the money. This guy makes way more per gallon sold than the guy with 500 cows selling to the processor. He's not getting rich, but he's got a steady stream of customers.

Besides it just plain tastes better!