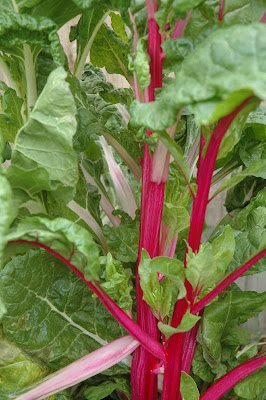 I’m a new fan of Swiss chard, after having grown it for the first time last year. Its edible Technicolor stalks – yellow, orange, red, magenta – alone would make this plant interesting. It keeps growing the more you cut. Add the qualities of leaves that can be eaten raw in salads or cooked, a hardiness that carries it through the winter, and a strong work ethic that keeps it producing even in summer heat when its taste-mate spinach has long ago bolted -- and you’ve got one versatile veggie.

Sounds too good to be true. Sigh.

Last summer when my chard plants were marked by tan, dried-up leaves, I chalked it up to extreme hot and dry July conditions. Everything else was wilted, too, and I thought water stress was the natural cause. 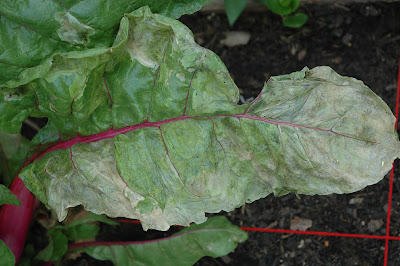 Chard is a biennial, meaning it grows one season and comes back the second, when it goes to seed. My chard plants sailed through winter, bursting forth with new greens early in the spring.

Yet I’ve already noticed the same sort of damage this year that occurred last, and I knew drought couldn’t be the cause so early in the game.

I more closely examined these leaves, practically recoiling upon discovering worms burrowing INSIDE the leaves, making something two-ply that I thought was just one. 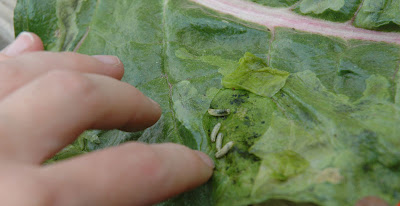 I learned that leaf miners are the culprit. These maggots are the larvae of a fly that lays its eggs on the leaf. When the eggs hatch, the maggots go inside the leaves, leaving ugly black-dotted blotches in their wake. Eventually the leaves turn brown. The maggots I found ranged in size from 1/8- to 1/3-inch. After burrowing for a time the maggots drop to the ground, pupate and become another generation of egg layers in fly form.

Beets and spinach are also susceptible to leaf miners. For a leaf crop like spinach, they can be especially devastating.

By the time you see leaf damage, this downward cycle is well underway, and quite difficult to interrupt. These leaf miners know what they’re doing! As maggots they’re safely cocooned inside the leaf tissue, where two standard organic methods – handpicking them off or spraying with insecticidal soap – are thoroughly ineffective.

So what to do? My cursory research on this pest pointed to trying to kill the eggs by using Spinosad, a relatively new product, which is registered with organic growers. The eggs appear on the underside of the leaves. Long and white, they looked to me like tiny grains of rice neatly arranged in the same direction. 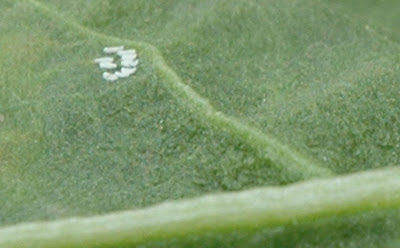 Another approach is to try to kill the pupae form in the soil, by adding beneficial nematodes. Using floating row covers is also said to help prevent the fly’s access in the first place. I’d be interested to know if any of you have tried these methods.

Realizing that every damaged leaf houses bugs seeking many great-grandkids, I thought it best to . . . well, nip this in the bud. I started to remove every single leaf with splotches. I cut them off with the stalk, which I separated and saved to take to the kitchen. Rather than composting these leaves, I chose to put them in the trash, because I don’t know if the leaf miners would survive the composting process. If you have chickens, feeding your brood is a great way to destroy leaf miners and their pads!

I also checked the seemingly pristine leaves for eggs. I found a few egg clusters on the top side of leaves, but for the most part the eggs were all underneath. I removed these leaves too, but set them aside for eating, since I can easily rinse or cut off the small sections with eggs.

This picture shows a plant before and after I removed damaged leaves. It was such a drastic transformation, that for the other plants I decided to save myself some time and just cut them down to about three inches off the ground. One of chard’s qualities is it will form new leaves even after such a brutal harvest. 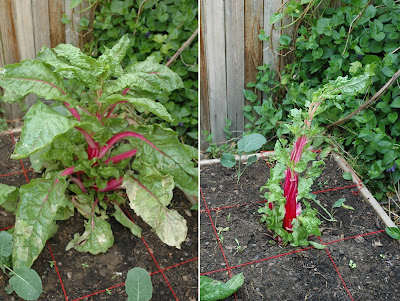 Remember, too, that unlike spinach, chard’s stalks mean that this extreme defoliation was not a total loss. As far as I could tell the stalks were not affected by leaf miners at all. Yet from now on I’ll plant spinach and chard far from each other, so an infestation of one won’t be as likely to affect the other.

I will be more vigilant in my chard patch to remove any leaves with eggs or damage right away. I also hope that through more frequent harvest of smaller leaves there won’t be as many chances (i.e. places) for flies to take roost. If the problem persists on a large scale, however, I may dig up and destroy my plants altogether to try to get rid of these pests, and then plant chard in a new location in my garden this fall. (I saw ants tugging away what looked to me like the maggots-turned-pupae; maybe I could enlist them to help?) I’m not sure how cooler temperatures affect the leaf miner, but I will not let infested plants carry over into winter again, as I unknowingly did this time around.

Ugh..that is just so gross. In particular because I'm now wondering if any of those nasty things ever wound up in our salads on the beet greens!

Do they infect lettuce too?

::shivers:: I had some a few places last year but I could see the trails they left in the leaves an cut that part of the leaf out, but only noticed it in things with single colored and fairly uniform leaves.

Good to know Jennifer. I would rather learn this by reading your post than find out by biting into a leaf full of worms.

It is yucky, but I don't think there's any fear of eating the buggers unknowingly. The splotches they create are too noticeable.

I don't remember, but I'm drudging up a story about a region in India that is completely vegetarian. Researchers couldn't understand why they didn't have nutrient deficiencies (there are a lot of things found only in meat), until they found out that the people were getting nutrients from the insects that infected their plants and the maggots in their flour. They didn't know they were eating so many bugs, but it's hard to have a source of food around and not have something growing in it!

I've only recently gotten used to the idea that I might have spider mite eggs all over my fingers. I'll take some time before getting around to accepting the fact that I'm eating them, too.

I have never tried to grow Swiss Chard though it was always in the grandma's garden. It is good to know about these little buggers so when I grown it I can look out for them.

Thanks so much for this info. I am growing swiss chard for the first time this year and so far so good but I would freak out if I bit into a leaf that was infested. I'll try to examine mine more closely and keep an eye on them.

Great article. I am checking my chard and spinach tonight.

Hi, I'm new to your blog! I've had leaf miners on my chard at every garden I've ever planted, regardless of whether there was a garden there before or not. (I first discovered them as I was eating some soup I have made with the chard...disgusting!) I have a feeling they must come in on the young plants when I buy them?? Not sure about that though. i have found though, that they tend do destroy the leaves in the beginning of the season, and then the plant kinda outgrows them. Hopefully you'll find that too.

Thanks a lot Jennifer. Last night I dreamed that I was eating lettuce with worms in it.

Okay, I am so glad I found this post. Today we picked a huge pile of beautiful chard from our garden, I started washing it (I soak it to let the grit fall to the bottom of the sink) and in the first three rinse//soaks I kept seeing these little worms. I did TWO more soaks with vinegar, and still worms! I thought something is not right, so I rinsed each piece by hand. Then I went to chop up the chard. SOMETHING made me pick up a leaf, and I saw this little bump under the leaf membrane, I squeezed it and OUT POPS ANOTHER WORM!! I was so grossed out! So I went and googled it and found this blog post! I am glad we did not eat that chard and glad I know what it is now.
My question is, are the olants we still have in the ground done for? Or can I slice off and continue growing new leaves safely from the roots? Also, if we compost the chard we had to throw out does that out the worms right back into the soil to start all over? And, does this worm thing affect other veggies the same way? should I be on the lookout in the rest of the garden?? Thanks!!

The best leaf miner solution I have found for swiss chard, spinach and beat greens is old fashioned fly paper. I weave the fly paper in an around the leaves and over a few days it becomes filled with the little black leaf miner flies and the degree of infestation of the leaves with larvae decreases by 90% or so. The fly paper lasts a long time and is non toxic, doesn't catch bees, etc. Not good for a real big garden but for growing these veggies in pots and boxes it works great.

Thanks so much for this post; I just couldn't figure out what the heck was going on with my chard and beet greens. It's all clear now! I removed leaves already infested with larvae, then have been going back to the plants every few days and gently removing any new eggs from the leaves with a piece of Scotch tape. Before they hatch. Totally impractical for large-scale garden, but for our small patch (six Swiss chard plants and ~30 beets), it has been working really well.

Thanks! I'm so gonna try this!

Ditto to the previous post! I finally know what is attacking my plants and now I know what to search for. I thought slugs were going to town on my chard. This will avoid my eating the little gross eggs And maggots also! ICK!!!

You don't have to remove leaves. I just wipe/squash the eggs off with my fingertip, and squeeze all the brown "tracks" on the leaves with my fingers. You get a satisfying squish feeling when you kill a worm in the leaf. Last year, I did this maybe 3-4 times over 2-3 weeks after I figured out what they were, and after that, the problem mostly went away. The eggs were mostly on the larger smooth leaves. Very few on the smaller, or more wrinkly leaves.