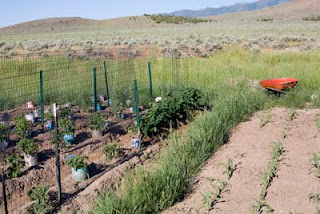 One of my greatest childhood memories from living on the farm has to do with potatoes. I don't think I remember one instance but rather many times that my Grandpa and I would go out to the potato field and dig up some new baby potatoes out of the potato field. We would bring them back to his house. Grandma would be shelling fresh peas from the garden into a big bowl. For dinner she would make creamed baby potatoes and peas. You can't find anything in the world that tastes fresher and cleaner. I want to have baby potatoes so I grow potatoes in my garden. At least I attempt to grow them. 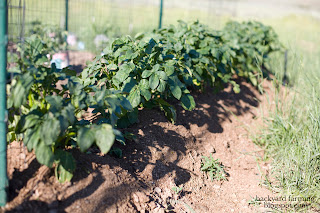 Our potatoes are big enough that we were able to hill them up for the second time this season. When hilling (or earthing up) potatoes you draw earth up around the vines of the potato plant. There are different schools of thought on when to do this but we usually do it when the plant gets 8 inches high, and then 2 more times as the plant gets about 8 more inches above the soil. It is easiest to hill potatoes in the morning as they tend to be more upright and perky. If you do it later in the heat of the day they tend to droop more. I have found the easiest way to do it is to gather all of the vines together like you would a pony tail and hold with one hand. This should cause them to point up in the air. Then with the other hand throw dirt around the vines. We have probably added an additional 8 inches of soil around the potatoes.

Here are a few benefits that your potato plants will get from hilling.


What suggestions do you have regarding growing potatoes?
Michael 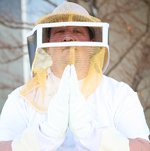 I am trying to grow potatoes in a big container (you can also use barrels). The theory is that you can 'hill' even higher - as high as your container is high, using chopped straw, soil or anthing like that to do the hilling, so long as the seed potato is in 4-6 inches of soil/growing medium. Supposedly potatoes will develop all along the buried stalk. Also, with holes in the bottom of the container, drainage is better.

I struck out completely last year , but I think it was blight. I'll see what I get this year.

We are attempting to grow potatoes for the first time this year. We have them in a large, used kiddie pool (with plenty of drainage holes) and in the garden. We are a half way to the 8" you suggested. Thanks for the information as it is still new to us. Looking forward to lots of yummy baby potatoes!!

Deb: We haven't had a lot of success with container potatoes but it must be our problem since we know a lot of people that have had success. Let us know how it goes for you.

Saren, I like the idea of using a kiddie pool. Good luck!

I was unsuccessful growing potatoes for the 1st time. Blight got 'em. Perhaps I'll give it another shot someday.